by firstcryptonews
in News

Facebook, Instagram and the widely-used WhatsApp messaging service all broke at the same time. Complete radio silence. The reason is allegedly a configuration error.

Facebook blamed a “faulty configuration change” for the widespread outage which impacted the social media platform, along with Instagram and WhatsApp, for several hours late on last Monday.

The platforms had confirmed on Twitter they were aware of issues and working to resolve them after thousands of people reported outages shortly before 5pm on that day.

Facebook, which has more than two billion monthly users, said it had resolved the “faulty configuration change”. The company said it was not the result of a DDoS attack or other external breach and there was no evidence of malicious activity. But some users blamed the outage on internet provider Cox Communications, while others speculated that it may have been caused by maintenance work introduced after Facebook announced new privacy rules previously.

Fingers were pointed everywhere, but this is not the first time a major tech provider shut down out of seemingly nowhere leaving literally billions of people in the dust.

HSBC, ITV, Waitrose and more are affected by a brief outage.

And there are many more!

Actual accidents or not, it has become clear as day that we can not just solely rely on the prior seemingly invincible tech giants.

UniMe uses state of the art end-to-end encryption to ensure secure communications. What’s different about Uni is that they have built their security protocols from the ground up. No infamous data mishandler big-corp such as Facebook was at any point involved with its creation.

This means that being able to chat freely on the internet without fear of your privacy being exploited is no longer a thing of the past. The App Store has certified that UniMe’s software is not linked to your data.

UniMe connects people and virtual assistants to enhance business and everyday life with powerful features such as crypto wallet payments, secure ID verifications (KYC) and many others including custom AI chatbots, all powered by an autarkic Blockchain.

UniMe is based on the concept of a new era that revolves around humans and strongly advocates for privacy, freedom, and trust. A society that embraces technology. More specifically, UniMe offers encrypted conversations, a mini virtual assistant and your very own crypto wallet hub.

This makes the multi-purpose chat app the perfect secure messaging program of choice for the “Society 5.0”. Back in 2016 the Japanese government proposed the concept of a smart human-centered with this name 5 and UniMe wants to accelerate it’s actualization. 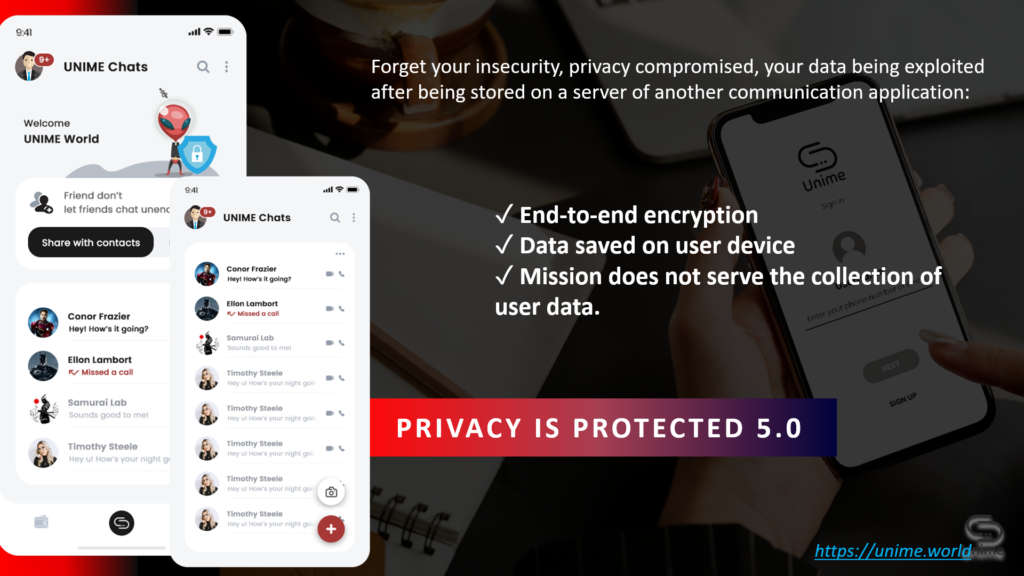 UniMe has changed the game of secure messaging apps by prioritizing privacy when it comes to chatting and calling with no compromise. State-of-the-art end-to-end encryption is used so that no one, including anyone at UniMe, at no point in time, can read your messages or calls.

No reverse encryption, un-hashing or similar. Even the government can’t request your data, because it is never stored in the first place. It’s created, sent, read and destroyed without a trace. No backups (unless you opt-in).

Regular civilians are provided with military-grade security for every text and call. Secondly, as mentioned above, the app has been equipped with a personalized AI Bot that is available 24/7. You can also remove any unneeded information on the business card and replace it with the QR code of the virtual assistant assisting you, allowing you more freedom.

Lastly UniMe has introduced a Blockchain wallet that allows consumers access to new technology to manage their digital assets. Gone are the days where you communicate with someone on one app while making payments on another. UniMe helps you chat to someone whilst making crypto currency transactions making it more convenient, time-saving, and suitable for older and less tech savvy people. Every serious crypto project is on the roadmap. UniMe aims for total integration.

Above all, you can control your digital assets via a secure personal wallet that processes data on the user’s device.. UniMe is a super app that has integrated two technology platforms, UniBot and UniChain.

Need help? Check out the UniMe – the top privacy messaging in 2021 manual!

KAZANO Currency Brief Overview 1 What is the casino currency 2 What he came to solve 3 What market is...

Are you using the secure messaging app? Specifically, one of those apps uses encrypted messaging. It will help you prevent...

Polker.Game has been bringing a constant stream of updates, development, and listings over the last few months - and they...

Blockchain Startup Kommunitas is building a tier-less launchpad platform for users to build projects within its ecosystem. This development will...

Japan CBDC has various hurdles to clear before launch

Smart Doge – A Token Smarter Than You, Is Here